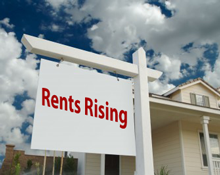 Rents for homes, condominiums and apartments climbed sharply in many Valley neighborhoods during the past few years and are still on the rise.

More Millennials and boomerang buyers bouncing back after foreclosure are purchasing metro Phoenix homes than ever. But it’s not just because they want a place of their own.

Rents for homes, condominiums and apartments climbed sharply in many Valley neighborhoods during the past few years and are still on the rise.

Billy Day and Jessica Simms bought their first home earlier this year after their rent jumped in central Scottsdale. The couple was able to find a renovated home in their price range in the popular area so they could stay close to their jobs, favorite restaurants and places to hang out.

“Our lease was coming to an end and upon evaluating the cost of rent, it was a better financial decision to purchase,” Simms told me.

For homes and condos, the average monthly lease rate in metro Phoenix rose 10 percent during the past year to $1,454, according to the Arizona Regional Multiple Listing Service’s April report.

Apartment rents in the Phoenix area jumped 8 percent during the past year, according to the most recent Yardi Matrix report. The Valley ranks No. 7 for the biggest rent increase among major U.S. metro areas.

The average apartment renter in metro Phoenix is paying almost $1,000 a month.

Rents are rising faster in some neighborhoods than others, particularly in central parts of Phoenix, Scottsdale and Tempe. Those areas, closer to restaurants, shopping, jobs and light rail are also seeing some of the biggest increases in home prices.

The Midtown Phoenix neighborhood Cheery Lynn/The Yard in ZIP code 85014 saw home prices jump 50 percent during the past year, according to Street Scout Home Values, an annual analysis of metro Phoenix’s housing market done with The Information Market. That was the biggest jump for any Valley neighborhood.

It’s tough to find an affordable home in many central Valley neighborhoods now. The many investors who purchased Valley foreclosure homes on the cheap during the crash and turned them into rentals are reaping the reward of higher rents now, and most aren’t inclined to sell.

Apartment developers are following buyers and renters. Anyone who has driven central Phoenix, Scottsdale, Tempe and parts of Chandler has seen the many apartment complexes under construction. Most of those developments are luxury complexes with higher-than-average rents.

More available rentals in popular Valley neighborhoods will increase supply. If demand from renters doesn’t climb as quickly, then rent increases could slow.

Thank you for contacting us, we'll get back to you shortly.

Sorry, we are unable to send your message at the moment. Please try again later.